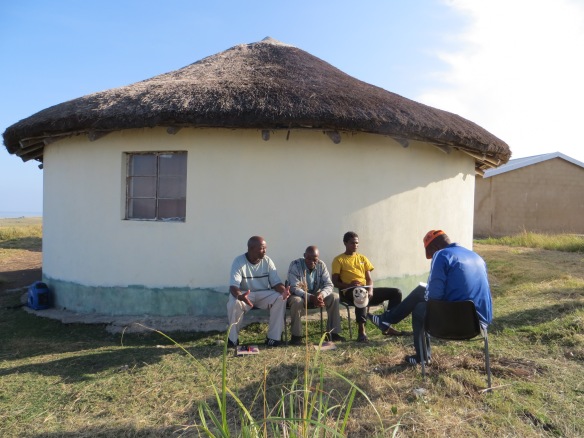 As part of the agreed upon project outcomes, a five day community workshop was held in the week of the 26- 30 May. This workshop was mandated to include both a discussion around the importance of protecting Maritime and Underwater Cultural Heritage (MUCH) sites and the teaching of basic archaeological survey skills through the Nautical Archaeological Society (NAS) courses. A team of seven people travelled to the Eastern Cape to present the workshop, including a SAHRA intern who participated in the NAS training.

The aim was to integrate the oral histories gathered over the course of the project within the structured topics of the workshop. In order to create an atmosphere of interaction and gauge the level of understanding, the participants were divided into three groups who would produce mini-projects representing a heritage site which they deemed important to the community and area. The resulting projects far exceeded the expectations of the project team and illustrated the outcome of the workshop as being one of mutual teaching and learning.

NAS courses were originally designed for the United Kingdom and within South Africa shipwrecks have been a central focus for previous NAS training. While shipwrecks continue to hold importance, there is a realisation that many South African cultures attach intangible meaning to various bodies of water such as lakes and rivers. Thus, the NAS training was adjusted accordingly.

The design of the workshop was informed by the field work done over two ten day periods, giving the team an idea of what to focus on to serve the needs of the community and the project. Presentations were done on topics such as Introduction to Maritime and Underwater Cultural Heritage (MUCH), Site Types, Site Survey, The Grosvenor Case Study, Heritage and Tourism, and Heritage and Legislation. Over the week these topics were introduced, explained and discussed.

The overall outline of the workshop was to present the basic idea of what an archaeological site type was, why they are important to preserve and how that preservation can be done through basic archaeological survey techniques. In the design of the workshop and the integration of the NAS curriculum, the team had to keep in mind that this was the first time that most of the participants had any interaction with the archaeology. In addition, all of the presentations and discussions were translated between English and Xhosa.

Thus it was necessary for the workshop to extend over 5 days. To best satisfy the objectives of the workshop the week was structured with theoretical and practical components. The mornings were dedicated to theoretical presentations and these were put into practice in the afternoons through group project preparation. This structure allowed the participants to use what they had learnt from the theoretical components to inform and mold their projects.

The numbers of participants varied throughout the week, due to other commitments, with between 13 and 19 attendees. However, with a core group in full attendance the combination of presentations and discussions provided the participants with a new understanding of Maritime and Underwater Cultural Heritage. The participants could then relate the concept of MUCH to their local heritage sites and implement practical ways of protecting these sites for the benefit of the community as a whole.