Last week I expressed my disappointment at not being expected to observe the traditional greeting of the chieftaincy by Venda women. No sooner had I lamented my exclusion from observing this custom did I find myself lying on the floor, on my side, in a semi-foetal position, with my hands  together, before a chief.

I had given up on this happening so I was caught completely off guard when I was just about tackled in an attempt to prevent me from shaking the chief’s hand. Before you judge me, let me assure you that I know better than to approach a chief in his homestead to shake his hand, but there were extenuating circumstances.

You see, after the haunched humming, people (Ramudingane, the chief’s advisor, the headman and the chief) started shaking hands. This had not been done during our prior meetings with chiefs, so, unsure what to do, I decided to follow Ramudingane’s lead. I too shook the advisor’s hand, then the headman’s. As I moved my extended hand from the headman to the chief, the headman leapt in between us, hurled himself on to the floor, and demonstrated what I was to do.

Ramudingane started to protest on my behalf (I had asked him about this form of greeting on my first day here, and he said it was only expected of Venda women), but I was on the floor before the words fully formed in his mouth. I couldn’t believe I was finally doing it! I was on the floor just like the Venda women I’d seen on television. Except I was all teeth. I couldn’t wipe the humongous grin off my face. At least I wasn’t giggling, which would not have come as a surprise because its not uncommon for me to giggle at the most inopportune times.

Re-enacting the greeting; I hope I did a better job than this with the chief!

(Something that has had me giggling for days now though is a chat I had with Ramudingane on our way back from one of the villages. I was asking him about the traditional attire of Venda women. He said if I was interested in getting something he would go with me into town to shop around. I told him I had seen some outfits through a shop window, and that I’d also seen them being sewn and sold by street vendors. The second those last two words passed my mouth I was sniggering uncontrollably. I know its silly (read childish), but it gets me every time. [For those who don’t get my ‘humour’, the words ‘street vendors’ only started being funny when I was using them here in Venda.] Tee hee)

Back to the long-awaited traditional greeting, I could see on their faces that the chief and the headman really appreciated my effort. I’m sure the advisor did too, but my back was to him so I couldn’t see his face.

The grin on my face was eventually wiped off a few hours later when Ramudingane and I had to abandon our bakkie on our way to another village because the alleged ‘road’ was so bad. We trekked up the steepest hill, in the scorching heat, with me in flipflops, for 46 minutes! Only to find that the village we were headed to only had two homesteads, one of which had two occupants, the other of which nobody lives in anymore.

We learned that this village used to be like any other village, with plenty of homes spread out over a large area. But the impossible roads (that 4×4 enthusiasts would love) and the remoteness of this village had over the years driven all but one family out and in to the surrounding villages. There wasn’t even a sign of other homesteads ever having been there.

The only occupants of this village – a daughter and her elderly mother – made the trek worth it though. We had such a lovely visit with them. And they turned out to be relatives of Ramudingane that he didn’t even know existed!

We’ve managed to visit eight villages in eight days, receiving a warm welcome in each home. Even the people we are clearly disturbing by our unannounced visits have not shown even the slightest hint of annoyance; instead  immediately stopping whatever they are doing to sit and answer our long list of questions. My favourite visits have been with the elderly and the younger generation. We were fortunate in one village to interview two young men in their early twenties, together with their grandparents, in one session. 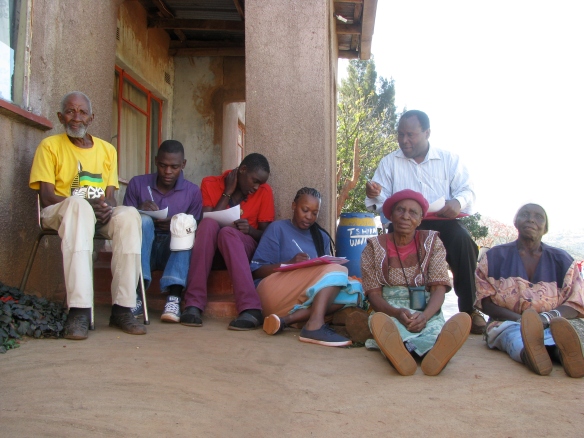 Interviewing this family was one of the highlights of my week

Oh, and I finally saw Lake Fundudzi! I gasped when I saw it. And I continue to gasp every time I see it. Every time. It’s breathtaking. Breathtaking. (Fellow Seinfeld aficionados will appreciate this description from ‘The Hamptons’/Breathtaking baby episode) Pity my photographs don’t do the lake justice. 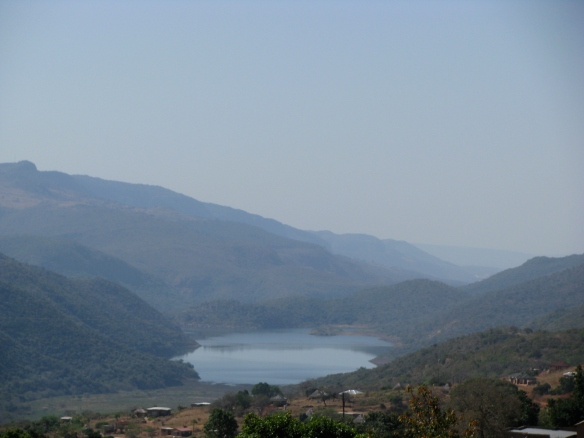 8 thoughts on “I finally did it, grin and all”