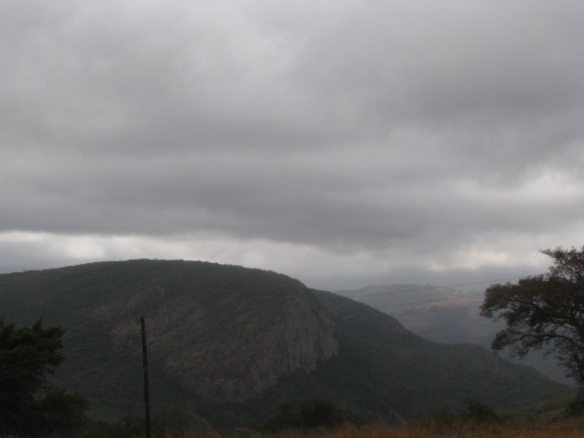 Fully aware that I was going into an area that is steeped in tradition, the singular thing I was most nervous about (and extremely uncomfortable with) going into this project was the protocol involved when greeting traditional leaders. I have seen on television how women prostrate themselves in front of the chieftaincy in greeting. All hopes that this practice was only expected of local women was dashed by a colleague, who told me that she had to lie on the floor a couple of times when greeting traditional leaders during a past visit to the area.

After much prayer and supplication I was at peace with it. I actually started to imagine myself lying on the floor, on my side, in a semi-foetal position, with my hands  together. By the time I left for Limpopo it was no longer an issue. I had mentally prepared myself to ‘do as the Vendas do’.

As it happened, the first appointment on the morning after my arrival was with Chief Netshiavha (of Tshiavha village) and his advisers. Of all the villages surrounding Lake Fundudzi, the Tshiava royal family is the only one that practices rituals in the lake.

Prior to my arrival, my chaperone-cum-translator-cum-research assistant, Edward Ramudingange had informed the local economic development manager, Nemakonde about the project. Nemakonde set up meetings for us with the relevant chiefs so that we could inform them about the project and request permission to conduct interviews in their villages. His laying of the groundwork was really appreciated as it played a big role in speeding up the consultation process. To quote Nemakonde, “When you do things smart the result will be smart.” Smart move too on Ramudingane’s part to contact him in the first place.

So ready was I for the prostration that I wore my darkest sarong. (I’ve learnt from past projects where I’ve spent weeks doing field work in rural villages that the easiest things to pack/wear/wash are sarongs and tops. In the sarongs I have a sensible skirt, scarf, shawl, head wrap and shade – all in one.)

When we entered the chief’s kraal we were shown into an empty rondaval and offered chairs. This was unexpected as I’ve seen on television women sit on the floor while only the men took chairs. As I was about to sit on a chair Nemakonde stopped me and directed me to another chair. Only then did I notice that the chair I was about to sit on was the only one in the room that had a leopard print cloth over it. I nearly sat on the chief’s chair!

Some minutes later four men entered the room.  Everybody who was already inside sprung off their chairs and got on their haunches, hands together, and started murmuring something I could not decipher. I did the same, except the sounds coming out of my mouth were more humming (with lips moving) than murmuring. During the haunched murmuring, which seemed to last forever, I remember thinking, “Thank God I started exercising again last week after many many months or there is no way I would be able to stay on my haunches for this long!”)

We had a very productive meeting, where it was agreed that later in the week we would consult with the Lake Fundudzi steering committee, which is made up of representatives from some of the villages surrounding the lake.

The following day we were scheduled to meet another chief, so I wore another dark sarong in preparation for the prostration. Unbeknownst to me, he was the paramount chief, Chief Kennedy Tshivhase! I needn’t have bothered with the dark sarong because again there was neither prostration nor sitting on the floor for me. I was wiser this time though; when the chief walked in I was on my haunches, hands together and humming at the same time as everybody else in the room. Except they were praise singing (I still couldn’t make out what they were saying), not humming.

That consultation meeting also went very well. Chief Tshivhase welcomed me and said he would inform the traditional council, which was sitting the following day, about the research project and my presence in the area.

After the final consultation, which was with the steering committee, I was more than ready to begin the interviews. And to finally see Lake Fundudzi, which I had only heard about and seen in pictures. The closest I’ve gotten to it is a view of a hill from Tshiavha village, behind which lies the lake.

It was only at the end of the consultation period that it dawned on me that I was disappointed that I was not required to observe the traditional greeting of the chieftaincy. I had not realised I had been looking forward to it until I was denied the opportunity. A classic case of, ‘careful what you wish for’. But in my case it was more like, ‘careful what you don’t wish for!’.

6 thoughts on “Careful what you (don’t) wish for”