We met up with one of my contacts, Mr Sihlali, in Lusikisiki, who introduced us to a Mr Makanya from a village called Lambasi. Lambasi spreads out over a large area, including the vicinity where both the Sao Bento and the Grosvenor got wrecked. He only mentioned the Grosvenor, and we were not aware that it includes the area where the Sao Bento wrecked until Wednesday. (But more about that later.) Mr Makanya said he’d speak to the chiefs in the area and get back to me. The two gentlemen mentioned that there are local people who have “white” surnames, and that they are probably descendants of the shipwrecks. Something else of interest that the two brought up is BBC China, which wrecked in 2004 not too far from the Grosvenor. My second contact, Chief Mjoji, wasn’t answering my calls but he eventually got back to me in the afternoon to say I must call him after 13:00 on Tuesday. 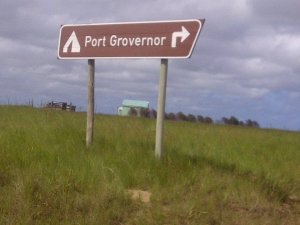 First thing Tuesday morning I phoned Jimmy, a tour guide who lives and works from Port St Johns. He said he would only be able to see us on Wednesday. I phoned Mr Makanya to make sure he hadn’t forgotten to speak to the chiefs in his area about us and the project. He said he was on it and I should call him again on Wednesday.

I managed to get hold of my third contact, Chief Faku Ndabankulu. (He is the one who said he was attending a meeting of the entire Faku chieftaincy clan.) The timing of the call was impeccable, because he was on his way from his village in Lusikisiki to Mthatha, so we were able to meet him in town in Lusikisiki 20 minutes later! But our hopes were dashed when he said he and his fellow chiefs were unable to help us. He brought up the project at the meeting and they all felt that because their clan resides more inland, none of them had any generational knowledge of shipwrecks.

Chief Faku did, however, make several phone calls to people he knows whose villages are closer to the coast. They all said they would get back to him. I was able to eaves drop on these conversations and I heard a mention of ship wrecks between Hluleka and Silimela, which is further down the coast (ie south of the Mzimvubu River). I asked him about this when he got off the phone and he said the person he was speaking to was going to get the details of the ward councilor in that area. When we parted ways Chief Faku promised to try and get us more contacts and to follow up with the people who said would get back to him.

We only managed to get hold of Chief Mjoji in the afternoon and we managed to meet up with him. He too said he didn’t have any information for us because his village, Malangeni, is inland. He did however say he would get us in contact with a certain Patrick van Rooyen, a local “coloured” man who is a descendant of the shipwrecks. He also said that he knew of the Caine and Ogle families, who are descendants of shipwrecks. “YAY”, I thought!

He also mentioned Nqguza Hill, the place where I told you there was a battle of historical significance in Lusikisiki. He said he was appalled at how that story was told by white people, when there are some local people who were involved in that battle that are still alive and tell a totally different story of what happened. He promised to take us there and introduce us to these people next week. He asked for a lift home and, low and behold, on the way there we came across Patrick van Rooyen.

He introduced us and the project, after which Mr van Rooyen immediately rattled off locals with “white” surnames who are descendants of shipwrecks – Caine, Ogle, Stoffel, Berry, Grimmit Canham and Roskruge – who are all apparently still in the rural villages of Lusikisiki. It turns out Mr van Rooyen is not a descendent of the shipwrecks, but of the Boer War. Chief Mjoji said he would take us around to these families this weekend, but I have not been able to reach him ever since. (Sigh!) Both Chief Mjoji and Mr van Rooyen mentioned the recent BBC China shipwreck.

We  made our way to Port St Johns on Wednesday morning to meet Jimmy. Although he didn’t have any new information about the wrecks and the people it affected, he did however show us a very detailed map that was soon to become my best friend. It’s shows the three wrecks we’re looking at and the villages close by. This is how I not only discovered that the Sao Bento wrecked close to Mr Makanya’s village, but also that the N.S. De Belem wrecked close to Noqhekwane, a village near Port St Johns where a woman I care for deeply lives! (YAY! Another contact!) Jimmy didn’t have any more of the maps so we made a photocopy. Then it started to rain. And rain. And rain. I didn’t think we’d be able to make it up to Noqhekwana after such a heavy downpour (the road up there is precarious on a clear sunny day). Jimmy also said there was no way we could make it up there, so after taking some photos from an airstrip looking down on Mzimbuvu River, we headed back to Lusikisiki.

Mzimvubu Rover on the way to Port St Johns

I phoned Mr Makanya again, but he wasn’t able to talk. By now we had had enough of not (yet) interviewing people so I decided it was time to head out to the villages and mission out on our own. With my new map as a guide, I found a camp site in Msikaba village and made bookings. The NSdeBelem wrecked in Msikaba Mouth and it’s apparently not too far from Lambasi village, where the Grosvenor wrecked. Mr Makanya also phoned back to say he had just come out of a meeting with some chiefs who didn’t have a problem with us going out into the their villages.

(There was a hitch with our booking though, the camp site does not offer linen! I called Chief Faku, who had mentioned when we saw him on Tuesday that he would be returning from Mthatha on Thursday, and asked him to please bring us linen from home. I arranged with him to meet up with my house mate at her place of work to pick it up on his way back to Lusikisiki the following day. He said he would leave Mthatha in the morning so that was perfect timing for us! Our encounters with Chief Faku were proving to be very serendipitous indeed!)

So much for Serendipity! Chief Faku ended up leaving Mthatha rather late, so we only left Lusikisiki in the early afternoon. He also said that he was still trying to get information from the people he had called on Tuesday. We found our camp site quite easily, though the last stretch of road was dreadful! Our van managed, although it got very hairy at times. Then we realised that there was no cellphone reception and had to walk quite a distance and up a hill to call you!

You’ll hear about this later. We’ll be going to find two families that the camp site manager told us about. They apparently go around the beach looking for and collecting beads from the Sao Bento!